Treating Sprained Ankles with Chiropractic Care
"Ankle injuries are not only common, but also costly for many people. According to a study published in 2013, in the United States alone, an estimated 2 million acute ankle sprains occur each year, averaging $318 to $914 per sprain.1..."

A Stronger Posture
"From the Greek word “ortho,” meaning to straighten or align, the first use of “orthotics” appears in the historical record more than 2,000 years ago..."

Think Outside the Box and the Spine (Part 1)
"Over the years, understanding and treating the extremities has moved to the forefront of my practice. Integrating extremity analysis and adjusting into your patient protocols can make you a more skilled practitioner..."

Think Outside the Box and the Spine (Part 2): The Ankle
"The extremities are often overlooked during physical exams and diagnoses. While patients may seek chiropractic because of a pain only in one area, the burden lies on us, as chiropractors, to give a thorough evaluation to determine if that pain is a result of a problem somewhere else in the body (e.g., back pain that actually stems from the hips)..."

Extremity Adjusting: A Vital Part of Chiropractic
"There is no question that the root of chiropractic lies in the use of the hands on the axial spine and pelvis. It has been something originally developed by D.D. Palmer and passed down the ages from our forefathers to us..."

Not Too Pleased with Your Knees
"In a typical chiropractic practice, most patients are treated for a variety of back and neck complaints. As a result, the general public often pigeonholes chiropractors as 'back doctors,' which has been our cross to bear for many years..."

Case Study: Hip Pain in a Soccer Star
"The patient is a 14-year-old soccer player who reports frequent pain in her right hip and posterior thigh region for the past several months. This is most noticeable the day after a strenuous soccer competition or scrimmage when she has obvious tightness and tension in the back of her upper right thigh..."

Every Shoe Tells a Story
"A shoe is like a book: if you know how to read one, you can learn a great deal. If you 'read' your patients' shoes, you can discover much about their postural conditions. Worn-out shoes and shoes that don't fit properly can interfere with the feet, pelvis and spine..."

Structural Imbalance and Postural Support
"Overpronation of the foot is one of the most common conditions affecting the human frame. This is a condition wherein the foot rolls inward, creating a foot that is flatter, wider and longer. A subluxation pattern of the various tarsals and metatarsals results..."

A Simple Exam Protocol to Assess Lower-Extremity Imbalance
"One of the most common conditions of the human frame is excessive foot pronation, in which the foot rolls inward, creating a foot that is flatter, wider and longer. A resultant subluxation pattern of the various tarsals and metatarsals results..."

Bunion Formation and Orthotic Support
"A bunion is a bursa and/or osteophyte over the prominent medial portion of the first metatarsal head. It is characterized by a lump or bump at the base of the first toe that is red, swollen and/or painful..."

The High School Athlete and Your Practice
"Every community has one or more middle school and high school, and the number of athletes in each is a rather significant number. High school sports programs are the heartbeat of all communities, and working with young athletes is exactly what many chiropractors should want to do..."

Treatment of the Child's Foot
"The chiropractor is frequently questioned by parents who have noticed something 'different' about a child's foot. Does the child need chiropractic treatment, referral to a podiatrist or an orthopedic surgeon? Should sports be limited or encouraged? What shoes are best?..."

What Are You Looking At? Five Red Flags that Indicate Postural Instability
"When I was a student in chiropractic college, I was constantly amazed at the skill displayed by the experienced doctors. They were able to read a patient merely by looking at them; there were telltale signs that had become predictable. People are generally the same..."

Four Ways to Improve Orthotic Function
"Patients occasionally report concern with their orthotics. In many cases, the problems or complaints could have been avoided from the outset by providing the patients with a few simple instructions..."

Case Study: Metatarsalgia and Orthotic Support
"Foot pain can interfere significantly with normal activities, and severely limit participation in sports. Metatarsalgia is foot pain involving the metatarsal bones in the forefoot—the complaint of pain on the bottom of the ball of the foot..."

Unlevel Pelvis in the High School Athlete: Exploring Causes and Effects
"The unlevel pelvis is all too common in the high-school athlete and if not detected, will likely cause a lifetime of musculoskeletal issues. Any provider who doesn't look for this common finding is missing critical information..."

Low Back Pain: A Case History
"A study1 in the February 2001 New England Journal of Medicine reported that 85 percent of all low back injuries could not be accurately diagnosed pathoanatomically. The study noted three areas of concern that physicians should consider..."

About
Why Custom Orthotics?
Products
Testimonials

All Testimonials
Find a Location 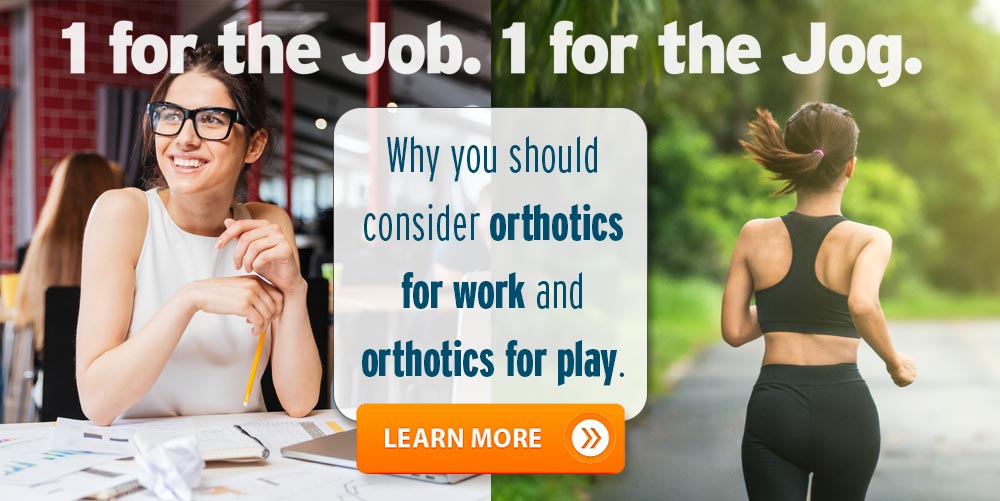