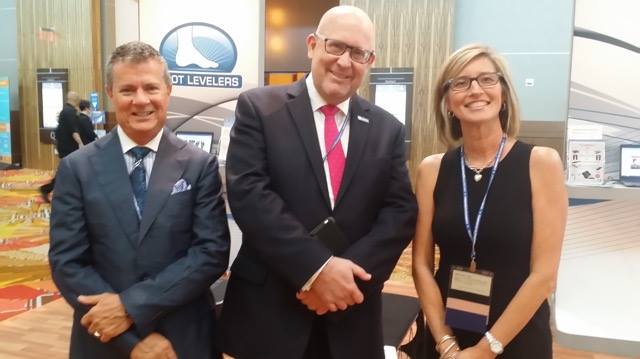 Foot Levelers made the announcement just prior to the WFC’s Assembly of Members, which was held March 13-14 in Washington D.C. As the exclusive Premier Corporate Partner of the WFC, Foot Levelers further extends its international presence and legendary support of the chiropractic profession.

Addressing delegates at the Assembly, Foot Levelers CEO Kent S. Greenawalt spoke of his support for the aims and objectives of the WFC.

He continued, “At a time where low back pain has been identified as the leading global cause of disability and where the overuse of opioids has reached epidemic proportions, we know that chiropractic is uniquely positioned to deliver non-drug, non-surgical solutions. The safe, effective care that chiropractic doctors are delivering to patients around the world translates to improved health for millions. Foot Levelers is extremely pleased to be working with the WFC at a time where the world needs more chiropractors.”

WFC Secretary-General Richard Brown, DC commented, “The WFC is thrilled to have signed this 3-year agreement and are proud that Foot Levelers will be partnering with us to further our mission of advancing awareness, utilization and integration of chiropractic internationally. Foot Levelers has an outstanding global reputation and the quality of their products is unparalleled.”

He continued, “We are looking forward to a relationship where the ultimate beneficiary will be chiropractic. The expertise and corporate support that Foot Levelers brings to the WFC will make an enormous difference to the projects and initiatives that we are looking to undertake in the coming years. To have a Premier Corporate Partner of this caliber is a huge boost to the WFC’s ability to exert influence around the world.”