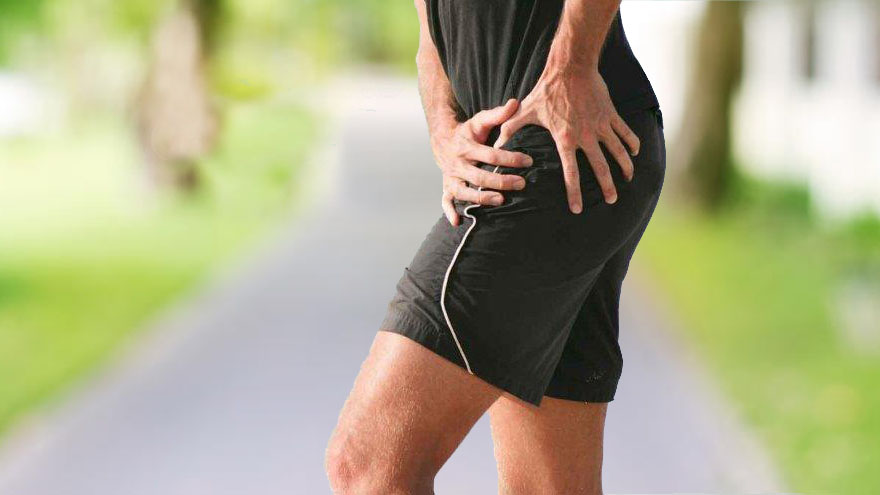 The competitive and the recreational athlete can each be affected by injuries to the muscles and ligaments around the hip.  These injuries can significantly interfere with sports enjoyment and performance levels, and they occasionally will end participation completely.  Poor shock absorption and excessive pronation have been found to be underlying causes or contributing factors for many leg/hip injuries. (1)  Orthotics, which have been custom made to improve the biomechanics of the feet and reduce the extent of pronation, can help to prevent many sport-related leg injuries.

Busseuil et al. looked at the foot biomechanics of athletes who reported a recent foot or leg injury and compared them to an uninjured control group. (2)  The researchers determined that those athletes with more foot pronation had a much greater statistical probability of sustaining one of five leg injuries, including iliotibial band syndrome (which is due to excessive tightness of the hip abductor muscles).  This study helps us understand how providing appropriate orthotic support to patients who are involved in sport or recreational activities lowers their likelihood of developing both traumatic and overuse hip injuries.

In the Busseuil et al. paper, sixty-six injured athletes who ran at least once a week, and who had no history of traumatic or metabolic factors, were the study group.  Another (control) group of 216 athletes were matched who had no symptoms of lower extremity injuries.  The amount of pronation during standing and while running at “regular speed” was determined by measuring the angles of their footprints.  This quick and inexpensive method of determining the amount of pronation during functional activities (plantar prints) had been previously investigated. (3)

The investigators concluded that those athletes with more pronation had a much greater likelihood of having sustained one of the overuse athletic injuries.  While both the standing (static) and running (dynamic) prints showed some correlation, the amount of pronation seen in the static weightbearing footprint was the most predictive of developing an overuse injury.  This study helps remind us that it is very important to athletic performance and for injury prevention to check the alignment of patients’ feet in the standing position.

Many hip injuries develop from poor biomechanics and gait asymmetry, especially when running.  Smooth coordination of the muscles that provide balance and support for the pelvis is needed for optimum bipedal sports performance.  This includes the hamstring muscles and the hip abductor muscles, especially the tensor fascia lata (the iliotibial band).  When there is a biomechanical deficit from the feet and ankles, abnormal motions (such as excessive internal rotation of the entire leg) will predispose to pulls and strains of these important support muscles.  The hamstrings (comprised of the biceps femoris, semimembranosus, and semitendinosus muscles) are a good example.

During running, the hamstrings are most active during the last 25% of the swing phase, and the first 50% of the stance phase. (4)  This initial 50% of stance phase consists of heel strike and maximum pronation.  The hamstring muscles function to control the knee and ankle at heel strike and to help absorb some of the impact.  A recent study has shown a significant decrease in electromyographic activity in the hamstrings when wearing orthotics. (5)  In fact, these investigators found that the biceps femoris — which is the most frequently injured of the three hamstring muscles (6) — had the greatest decrease in activity of all muscles tested, including the tibialis anterior, the medial gastrocnemius, and the medial and lateral vastus muscles.  The authors of this study theorized that the additional support from the orthotics helped the hamstrings to control the position of the calcaneus and knee, so there was much less stress into the hip joint and pelvis.

Using orthotics to correct excessive pronation and to treat hip problems requires an awareness of the various problems that can develop.  The following is a list of the pathologies that are seen in the hip and pelvis secondary to pronation and foot hypermobility: (7)

These conditions will develop much more easily in athletes who push their musculoskeletal systems, in order to achieve greater functional performances.

Excessive pronation and/or poor shock absorption have been shown to be an associated or causative factor in many leg injuries — from the foot itself, up the lower leg to the knee, thigh, and into the hip joint.  The good news is that many of these conditions can be prevented with custom-made orthotics.  Evaluation of foot biomechanics is a good idea in all patients but is especially necessary for those who are recreationally active, or for anyone who has experienced hip problems.  To avoid potentially disabling hip injuries, competitive athletes must have regular evaluations of the alignment and function of their feet.  Additional preventive measures include wearing well-designed and solidly-constructed shoes.  When athletes are provided with custom-made orthotics, we chiropractors can prevent arch breakdown and biomechanical foot problems, and we can also treat numerous injuries to the lower extremities, including the hip joints.

Dr. John Danchik is the seventh inductee to the American Chiropractic Association Sports Hall of Fame.  He has been in private practice in Massachusetts for over 30 years. His experience includes serving as chairperson of the United States Olympic Committee’s Chiropractic Selection Program.