June is National Scoliosis Awareness Month. So, in the spirit of education, detection, and fostering more awareness of scoliosis, let’s understand how chiropractic plays such an important role in this condition. Recall that the classic “structural scoliosis” is a sideways, abnormal curvature of the spine that can range from being hardly noticeable to so severe it affects people’s posture and height. The appearance of scoliosis is generally in 3 forms:

Structural scoliosis causes can be from certain neuromuscular conditions, such as cerebral palsy or muscular dystrophy, birth defects affecting the development of the bones of the spine; injuries to or infections of the spine; or spinal cord abnormalities.

The signs and symptoms of scoliosis can include:

According to the American Chiropractic Association, around 7 million Americans (5% of the population) suffer from scoliosis. Some people are born with scoliosis, and some develop scoliosis as they grow older. In my experience, around 90% of scoliosis patients have a spinal curvature that is not severe enough to require surgery but is extremely painful because of how it affects the vertebrae and the associated anatomy.

As the degree of curvature increases, the excess curvature can cause other health problems. It is helpful to have moderate to severe scoliosis diagnosed early so that appropriate soft tissue, spinal adjustments, exercises, and home care can be implemented. At times, surgical intervention may be necessary for the well-being of the patient.

However, most of the patients consulting chiropractors for care have a minimal to mild lateral curvature. In our society, patients are often left to their own devices to understand what scoliosis really is. So, when they hear the word “scoliosis”, their minds jump to the worst-case scenario, and they often get very concerned. Did you just picture in your mind someone who is contorted by the worst scoliosis you could imagine?

We see this doomsday concern in the parents who bring their children into our clinics for consultation and care. A health care authority like the school nurse, the pediatrician, medical doctor or physical therapist may have indicated the presence of the lateral curvature, so the parent or individual is now concerned. We also see this in adult patients who mention casually they have scoliosis that they have to live with. What the people don’t realize is many of the scoliosis cases that come us are not structural, they are functional. Structural scoliosis is a result of a structural abnormality within the spine itself, while functional scoliosis (also known as nonstructural scoliosis) is a result of irregularities in other parts of the body, such as leg length inequality or overpronation, that result in a postural imbalance.

For us chiropractors, one major contributing factor to this type of scoliosis is excessive foot pronation. In my practice, I have seen that excessive foot pronation exists in around 99% of the people whom I treat. This is an incredible amount of arch collapse in patients walking into your clinic on a daily basis. It’s so prevalent that observing it is easy when you look for patterns.

Let’s look at the picture below as I review with you the path of biomechanical stress that excessive foot pronation creates leading to the functional scoliosis. We start our journey at the foundation of our body, the feet. In this example, the patient’s left foot is overpronating more than the right. Recall that excessive pronation occurs bilaterally but it is often worse on one side than the other. For ease of understanding, the arrows are only on one side of the diagram explaining the side of worse pronation.

With the lateral, transverse and medial arches collapsing, the foot bones drop to the floor and the tibia internally (medially) rotates. If the feet are flat enough, you will even observe them flaring outwards, typically worse on the side of greater pronation. As the tibia internally rotates, the patella moves medial, and the femur bone follows suit. Don’t forget that the fibula bone is also stressed at the lateral malleolus and the head near the lateral knee. The internal rotational stress on the femur hits the acetabulum, tipping the pelvis inferior.

The diagram helps you see how the dropping of the pelvis towards the side of worse pronated left foot creates the functional levoscoliosis. There may also be some accompanying dextroscoliosis in the thoracic spine to compensate. This phenomenon is very common for our patients. Some don’t even know they have a functional scoliosis until we notice it and point it out to them.

So what do we do for this patient? Use your knowledge of what you see in the picture above and formulate your plan! Treatment of functional scoliosis can be as simple as 1-2-3.

It goes without saying that we need to adjust the bones that are affected by excessive foot pronation. This means all 26-foot bones, the tibia, fibula, femur, pelvis, lumbar, and possibly the thoracic spine. This universal pattern is easy to understand for you both you and your patients, so you essentially are reversing the effects the pronating feet have had on the joints.

Without custom stabilization, during weight-bearing activity the excessively pronating feet will overcome the amazing adjustments you provide and bring back pain and instability to the biomechanics of the body. Foot Levelers is the only company with the patented three-arch, custom, flexible support for the feet. By supporting the three arches, the picture we have been referencing looks more like this: 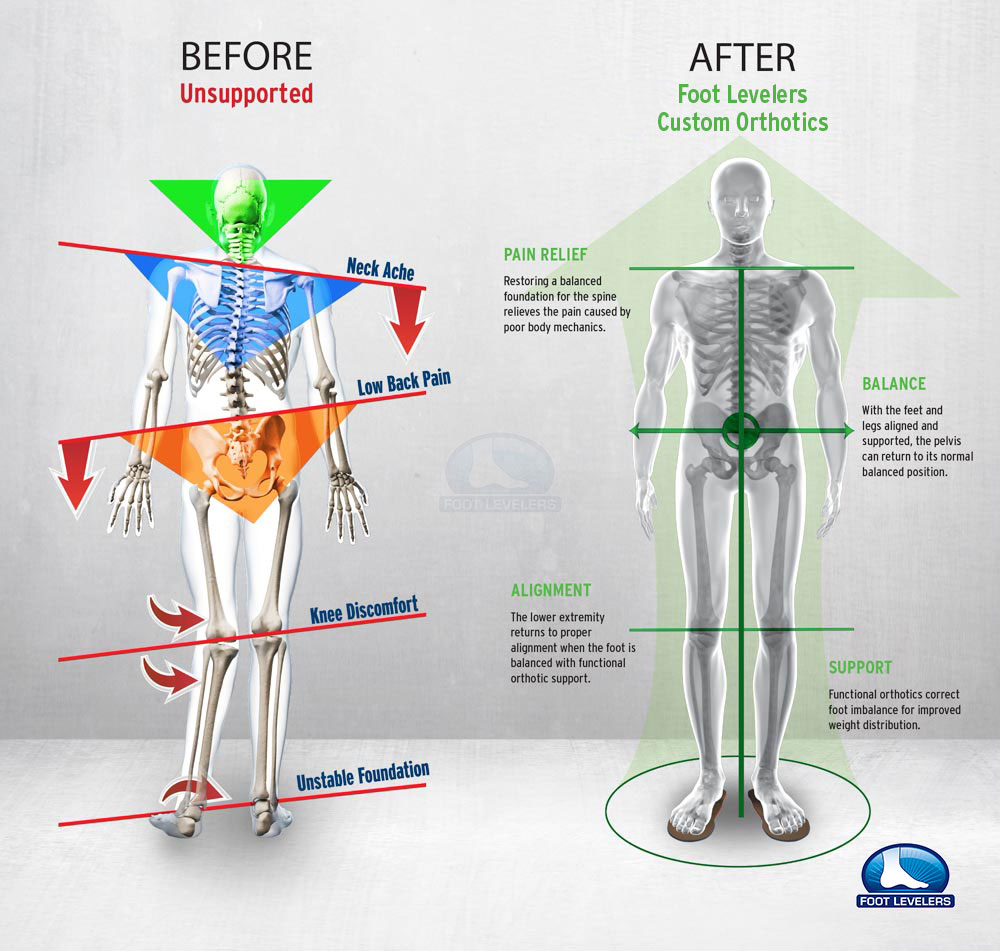 With the feet supported, the arches are in their proper position. The tibia and femur do not rotate medially, and the hips and pelvis don’t tilt. The spine stays straighter and more aligned, so the functional scoliosis is negated. I hate to make it sound so simple, but it honestly is.

Exercises to strengthen the lower back, core, and feet will help round out the treatment. The foot muscles do not support the arches primarily (that is from the plantar fascia and other bone to bone ligaments). But exercises for the intrinsic muscles of the foot can provide secondary support along with the custom orthotics. For some easy exercises that you can share with your patients, look at the pictures below.

The bottom line is that Foot Levelers orthotics will help reduce and improve the functional scoliosis in patients. Supporting all three arches of the foot levels out the foundation. With greatly reduced or no excessive pronation now occurring, the negative biomechanical effects on the spine are removed. This not only allows the functional scoliosis in the lumbar and thoracic spines to disappear or be greatly reduced, but it allows the patients to hold their alignment from your adjustments better. As a member of Foot Levelers Speakers Bureau since 2004, Dr. Wong travels the country speaking on extremity and spinal adjusting. See upcoming events with Dr. Wong and other Foot Levelers speakers at footlevelers.com/seminars.