One of the most recognized and common running injuries is runner’s knee. But in fact, runner’s knee is not an injury in of itself. 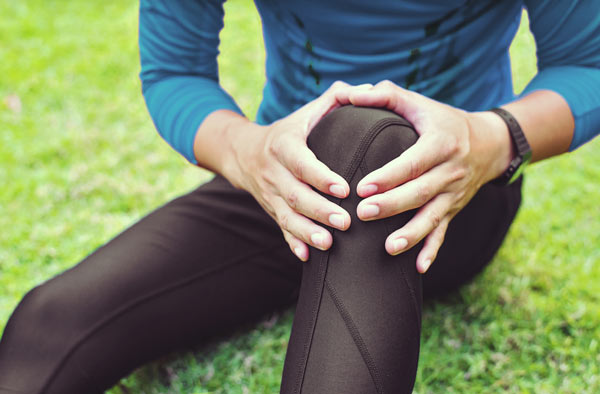 Running hurts. Plantar fasciitis, Achilles tendonitis, medial tibial stress syndrome, metatarsalgia. And one of the most recognized ‘injuries,’ runner’s knee. But in fact, runner’s knee is not an injury in of itself. It’s a generally broad description of knee pain caused by other knee injuries, including iliotibial band syndrome, patellofemoral pain syndrome (PFPS), and/or chondromalacia patella.

Some estimates put the number of runners who are sidelined annually by injuries, including knee injury, at 90%.

Runner’s knee is almost always attributed to one of two things (or both for that matter): poor biomechanics and/or overuse.

Feet are the foundation…of pain

Ninety-nine percent of feet are normal at birth. But problems develop quickly. By the first year, 8% develop foot troubles, and that number jumps to 41% at age 5 and 80% by age 20.[1] By age 40, nearly everyone has a foot condition of some sort. Many foot conditions eventually contribute to health concerns farther up the Kinetic Chain, especially the generalized condition of “back pain” or of course runner’s knee. Spotting a potential problem originating in the feet can prevent other injuries from affecting a patient’s health and/or lifestyle.

A study published in the British Journal of Sports Medicine in December 2015 found that runners who avoided injury were those who landed lightest on their feet, sustaining the lowest levels of impact loading.[2] The researchers suggested that runners consciously think about landing more softly and that they adjust their stride so that they land closer to the midfoot.

Running can lead to a number of different injuries, whether from sudden trauma or developed over time due to microtrauma produced by biomechanical errors, structural asymmetries, tissue weaknesses, or excessive external loads. Runners often will attempt to treat pain through stretching or exercises that target the area that hurts, though the source of the pain might actually be elsewhere along the Kinetic Chain. In many cases, that source is an imbalance in the feet.

A significant factor in reducing knee injury and pain, caused by improper biomechanical forces, is frequently overlooked by practitioners: the use of custom orthotics to improve biomechanics.

Custom orthotics are used to align and support the foot/ankle complex in a more near-normal physiologic position for a weight-bearing foot to prevent dysfunction and/or improve function of movable body parts.[3] They are indicated to:

Custom-made orthotics that use viscoelastic materials can help to reduce the musculoskeletal impact from heel strikes when running. This shock absorption can be of help particularly when there is instability, chronic degeneration, or inflammatory arthritis in the joints.

Orthotics that are designed specifically to cushion the impact load incurred from running can reduce pain triggers all along the Kinetic Chain. For example, Foot Levelers XP3 and XP3+ have shock-absorbing heel cushioning ideal for runners.

How to avoid those knee injuries

When orthotic care is indicated, custom-made functional orthotics can help reduce pain. Look for orthotics that support the running gait by absorbing shock at heel-strike, supporting mid-stance, and providing propulsion at toe-off. All Testimonials
About
Find a Location