Why Rigid Orthotics are Bad for the Body

There seems to be an ongoing debate when it comes to evaluating the feet for making orthotics.  Which is better, weight bearing ornon-weightbearing casting or scanning?  The method you choose depends on several factors.  What is your desired outcome, a flexible custom orthotic that supports optimal gait dynamics or a more rigid orthotic that limits movement to treat an orthopedic problem?

They both have their place in patient care but in the Chiropractic practice, a vast majority of patients fall into the category of needing a flexible orthotic that allows the foot to compress and absorb shock but at the same time, block excessive pronation.  It should also facilitate efficient, symmetrical joint function of the lower extremities while enhancing the neuromuscular response and postural tone.

In the early days of orthotic production, podiatric orthotics attempted to manipulate the position of the foot with rigid materials based on molds of the foot taken in a non-weight bearing position.  Prolonged use of this type of orthotic produced low back pain in many patients because they prevented the normal amount of subtalar pronation in the gait cycle.  The foot needs to be able to flatten a bit to absorb the shock forces.  This dynamic movement of the foot also feeds proprioceptive input into the brain which is important for normal motor control responses that affect gait, posture, and balance.  A lack of movement in the foot from too rigid of a device can effectively cause a dysfunctional foot contributing to abnormal weight bearing, joint inflammation, tissue damage and ultimately injury or degeneration.

Excessive pronation has been linked to low back pain, knee injuries, weak posture, as well as a myriad of other mechanical stressors.  I personally measured the amount of navicular drop in thousands of patients during my career and the thing that stands out the most to me is that nearly everyone pronates asymmetrically.  This lends itself to biomechanical stress that affect the feet, knees, hips, pelvis and spine and the asymmetry can only be measured when the foot is in the functional position of full weight bearing.  Creating a cast or mold of the foot in a non-functional position ignores the importance of the neurological feedback mechanism of proprioception, which is our perception or awareness of the position and movement of the body.

The proprioceptive response is what engages the muscles of the lower extremity for gait and creates the postural tone, which keeps us upright.  Interfering with that system by preventing the foot from moving through the full range of motion has global effects on the body that can contribute to postural distortions affecting even the cervical spine and upper extremities.  The idea that the foot can be manipulated into an ideal orientation with a rigid device based on a non-functional position of the foot is mechanistic at best and ignores the complexity of functional movement.

When you evaluate a patient’s functional movement, you can easily differentiate how well they perform the functional squat test with no orthotic, a rigid orthotic made from a non-weight bearing evaluation or a flexible orthotic made from a full weight bearing cast or scan.  The differences in biomechanical function of the lower extremity are easily documented, and the patient in many cases can detect significant changes in ease of movement, flexibility and even pain in the knees and low back. 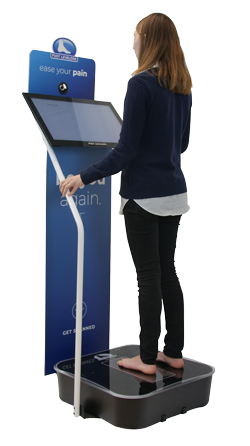 The use of rigid orthotics in functional movement assessment often reveals inefficient movement patterns from an inhibited proprioceptive response because the foot is kept in a position that altered form the position it would naturally assume in full weight bearing.  Orthotics that are manufactured based on the “theory” that the foot should be supported in position of subtalar neutral or as one manufacturer claimed, in the position that represents the arch in its highest point are flawed in that they don’t allow the foot to be the dynamic, shock absorbing proprioceptive machine that it is.

To get an optimal patient response to orthotic use, the orthotic must allow the nervous system to engage the complexities of movement, balance, coordination and strength.   Non-weightbearing assessment and the rigid or semi-rigid orthotics that are made from that assessment often find themselves tucked away in a sock drawer because the reality is that they inhibit the proprioceptive response negatively affecting pain and movement.

Dr. Brian Jensen is a 1987 graduate of Palmer Chiropractic College. Dr. Jensen owns Cave Spring Chiropractic in Roanoke, Virginia. He has shared his experience with other doctors in continuing education seminars over the past 13 years in the U.S. and abroad.

Get Custom Orthotics for Lower Back Pain.